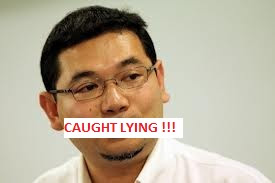 Rafizi Ramli insisted that he has a report that 5,000 acres of land in Gemas were given free to National Feedlot Corporation (NFCorp) for the National Feedlot Centre (NFC) project. Malaysian Insider and MalaysiaKIni reported MP Khairy Jamaluddin had debunked this with Rafizi Ramli on 11 November 2011. But no, Rafizi went on rattling this line. On 24 May 2012, Rafizi was quoted to have said to The Sun Daily, “Then you find that the government gave RM250 million and 5,000 acres of land – not to thousands of farmers – but to one minister’s husband.”

Here is an extract from the Lease Agreement signed on 5 March 2010 between NFCorp and the Menteri Besar Negeri Sembilan representing the state government for the NFC project. It states clearly that the land leased is 1,500 acres (see pic).

The land was also never given free as claimed by Rafizi. A rental is paid to the State Government of Negeri Sembilan represented by the lessor - Menteri Besar Negeri Sembilan for the use of the land (see pic).

There was also never any truth in Rafizi’s claim that 3,500 acres of land were withdrawn by the Negeri Sembilan state government because NFCorp had failed to meet production targets. There was also no timber to have been extracted from this land area as claimed by Rafizi. The State Government had cleared the land of its Arcacia trees (also known as thorntrees) for Napier grass cultivation as fodder before it was leased to NFCorp in 2007.

Again, these are vile lies on Rafizi’s part to slander NFCorp in bad light and to rile the public. Rafizi’s recent tweet below is evidence of his continued malicious lies (see tweet).