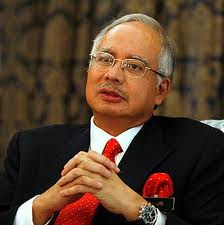 We often hear complaints about how time is getting shorter and that it is hard to get anything done in a day. Years passed by so suddenly that we barely notice that our child has turned into a teen. A year, basically feels like a month especially when we talk about putting our plans into work or even draw a plan itself.

For leaders, 3 years is usually considered as mere ‘warming up’ stage. Putting things and people at their right places, drafting goals and drawing plans and eventually implementing them sometimes would take more than three years. Sometimes a leader can only see the results after he has retired and sometimes won’t even have a chance to see his plans being executed at all.

However, such is not the case for Datuk Seri Najib Tun Razak. He has been warming up long enough, in fact since his childhood days as he witnessed his father serving the people day in and day out as Prime Minister.

Therefore, Datuk Seri Najib has been in full gear when he was assigned to the cabinet at the age of 25 as Deputy Minister of Energy, Telecommunication and Post in 1978.

When he succeeded Tun Abdullah Ahmad Badawi in 2009 as Prime Minister, Datuk Seri Najib was more than ready to make things happen for Malaysia. In order to do that, he has been whole-heartedly serving us with undoubted dedication and commitment. And come this 3rd April 2012, which is exactly three years in power, Datuk Seri Najib is not only able to witness how his ideas are being implemented, but how some of them have actually shown positive results. In other words, he not only got to witness the process of transformation, but the final transformed products itself.

In his Government Transformation Plans (GTP), Malaysian government has implemented many measures to increase transparency and government accountability. These measures include the use of Key Performance Indicators (KPI) to hold ministers accountable for their work, using new media such as Twitter and Facebook to communicate with citizens about happenings in the government, opening previously closed government tenders to increased public participation and scrutiny, and soliciting public feedback on government spending.

In merely 3 years, Datuk Seri Najib’s hard work and brilliance can be judged clearly from the table below:

Datuk Seri Najib is also quick to react to the rising cost of living. In order to ensure that it would not affect the rakyat, from 2010 to July 2011 alone, a total of RM36.7bilion was spent on cash hand-outs, subsidies and other form of assistance to the rakyat. Among the initiatives introduced under CoL are Kedai Rakyat 1Malaysia, 1Malaysia Rakyat Menu, 1Malaysia Clinics and Bantuan Rakyat 1Malaysia.

It is a shame that despite all these, the Oppositions of Malaysia continue to deny the goodness and the blessings that we consistently enjoy in Malaysia under the care of our leadership. Instead of spreading words about their accomplishments, the Oppositions keep trying to demean and degrade whatever that Datuk Seri Najib has achieved.

However, the facts laid out above and before our eyes are undeniable no matter how hard they try. Because figures don’t lie. But the Oppositions - the enemies of Datuk Seri Najib, do and lie is all they can do as they have proven to the rakyat that in 3 years, the Oppositions have not accomplished anything significant at all, in all 4 states under their rule.