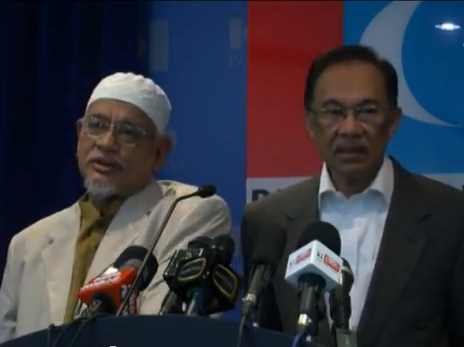 Look, if i were to vote, the first thing i would look is the coalition, it's manifesto and of course its top leader. I would like to know who leads this country if they were to win the coming general election. In Barisan Nasional (BN) its confirmed, Prime Minister Datuk Seri Najib Haji Tun Abdul Razak will be the Prime Minister, but how about Pakatan Rakyat (PR)?
Most of you by now will scream Anwar Ibrahim !!  but hold on, this is what Karpal Singh & Hadi Awang has to say about Anwar Ibrahim :
Karpal Singh :
Anwar Ibrahim has created enough trouble for the country. Anwar Ibrahim harus bertaubat ! Suddenly, this Singh had made a U - Turn and came out defending Anwar Ibrahim saying that he is the most qualified in Pakatan Rakyat. Bloody hypocrite! First you said Anwar has created enough trouble for the country, now you are saying he is most qualified.
What i can conclude is that Anwar Ibrahim is the most qualified trouble maker to be Prime Minister? Hang on i'm not done, let's see what Hadi Awang has to say:
Hadi Awang :
I welcome the idea to be elected Prime Minister, it will be so "Syok"
Ok, now i am confuse, who again will be the Prime Minister if PR were in power? Anwar Ibrahim, Hadi Awang or maybe Lim Guan Eng?