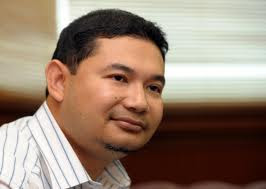 How ironic, before this there was never once mentioned by Opposition Leader Anwar Ibrahim of any high speed railway project, well forget about high speed, i have not even heard in any of his ceramah on youtube that he mentioned anything about providing public transports, except that oil prices will reduce once PR are in power, cheaper cars, free education etc.

Ok, let's focus on the issue at hand. I have looked at the comment & proposal by Rafizi Ramli and i can conclude that it is very weak in its plan, execution and rate of Return on Investment (ROI).

First : Although the manifesto for PR will only be launched this Monday ... I can give an early preview that it will give a specific commitment to build an interstate high-speed rail system. The system will connect major cities along a route from Perlis down to Johor Baru, and connect the east coast of Malaysia to the west coast

I have heard that Rafizi Ramli was an exceptional bright talent in Petronas when he was with the National Oil Company. However, as an accountant i would have hoped he had done his research before promising the rakyat of something that the government of Malaysia has already decided on.

The flaws in Rafizi's proposal is that it does not provide anything different compared to the BN government initiative with Singapore, Basically it is just plagiarism of ideas. Look, any investors who would want to invest on a high speed railway needs MONEY. The means a high amount of capital expenditure (CAPEX).

In order for the project to be attractive, the ROI has to be high, and for this to happen is for you to have a high volume of passengers. Plying a single route between Singapore  - Kuala Lumpur is not going to be profitable, it has to be segregated into a few stations to ensure that the volume of passengers keep increasing.

That's why the high speed rail plan by BN, which i was informed by people familiar with the project will include a minimum of 5 major stations namely:

Although it is still in its infancy, this plan by the BN government should be louded as we are talking about 5 states (Singapore as 1 state) merging together for a major public transportation project. Is this not called an interstate high - speed rail system as what is being promised by Rafizi? he he

I pity rafizi, devout of any concrete and sustainable ideas, he has to copy ideas by BN and make it sound that it is his ideas. Oh and what's with this statement coming out from Rafizi's mouth:

This project puts the people’s priority first even more so, and it will be the main difference between Barisan Nasional (BN) and PR

Eh hello, the high - speed railway project is for the rakyat. If Rafizi is saying that the ticket prices will be expensive etc, well he is talking crap because no announcement has yet been made and i would advise Rafizi not to pre - empt something that you don't know. Come on, as a high flyer you can do better than this.