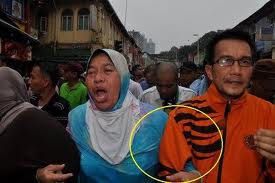 Writer was quite shocked when reading a newspaper article yesterday regarding PKR's Indera Mahkota MP, Azan Ismail who claimed that he was offered millions of Ringgit by BN to jump off from his party. He said, the reward was offered by an individual who he met in a hotel in January 27, 2010.

Writer was not shocked and believe in the story. Instead, I was trying to remember who Azan Ismail is. We rarely hear his name and what is the significance of this person in Malaysian politics? If the article is true, Azan did mention that a few other opposition MPs also received the same offer, they are MPs who have quality. I repeat, with quality.

Few of the news related to Azan which is the most popular include on April 29, 2008 where he became rude for not shaking hands with the Prime Minister and Deputy Prime Minister in an official program. Thus, I would sense that Azan is a person who was never taught how to have manners.

In other news which I found on a website called SuaraKuantan on May 20, 2010, rakyat Kuantan mentioned that they were bored with Azan.

The report said,"To Azan Ismail, us voters for Indera Mahkota Parliament have no idea how to put this, if you cannot help us, it would be better if you resign as an MP. To all Malaysians, Azan Ismail has never done anything as an MP..."

It seems that people were really mad at him where they even included curse words which I cannot put in this article.

Another news where everyone should know is the fact that he was rejected by his own party. On June 18, Sinar Harian reported that Pahang's PKR Chairman, Datuk Fauzi Abdul Rahman made a public statement saying that he had put Lee Chean Chung as a candidate to compete at the area of Azan, Indera Mahkota Parliament for GE13. His excuse was,"I do not judge a person from his performance, but I choose candidates through their leadership which include their personality and moral."

Isn't this a clear signal that PKR itself rejected Azan and took him as a person who do not have anyy moral and good personality?

Then how can he has all the quality that he was offered tons of money to jump away from PKR? Why would BN want to buy a rude MP such as Azan?

Actually, Azan realized that he is yesterday's news for PKR, that is why he is trying his best to gain the attention from PKR by pulling some strings.

I would like to remind him that he does not need to use BN to help himself getting out of trouble because BN do not want anyone without any quality.

Even those without any quality in BN have been kicked out such as Kadir Sheikh Fadzir.